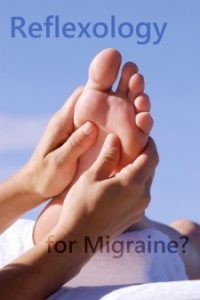 While it’s safe to say that everyone experiences the occasional headache, more than 10 percent of the world’s population suffers from debilitating migraines. It’s not just pain that’s felt when these migraines occur, but also symptoms such as nausea, lightheadedness, and sensitivity to light. According to the Migraine Research Foundation, more than 90 percent of sufferers experience these migraines so severely that they’re unable to function normally during an attack.

Traditional treatment for migraines involves both over-the-counter pain relievers and heavier prescription drugs. But for those looking for a more holistic approach, reflexology for migraines may be able to bring immediate migraine relief.

For many, applying pressure to specific areas of the feet can release blocked energy and encourage the corresponding organs to begin functioning as they could. While there are several points along the feet that can serve to relieve these symptoms, the primary one is known as Tai Chong. This is especially important because it runs along the meridian of the liver, which is key of ensuring that energy is running smoothly through the body.

One study, conducted as far back as 1995 by the National Board of Health Council in Denmark, found that 16 percent of people who underwent reflexology were completely cured three months after treatment. Of those who weren’t completely cured, 65 percent reported a significant decrease in symptoms. Another trial out of Denmark studied migraine sufferers who’d been ineffectively treated with morphine, ketogan, and albergin. Each of these participants received an average of 12 reflexology treatments. While 10 percent reported feeling just slightly better, 75 percent said they either felt significant improvement or they no longer suffered from migraines at all.

For those looking to see if foot reflexology may alleviate their migraines, focus on the Tai Chong point on the top of the foot, in the webbing between the big and second toes. If you’re experience migraine symptoms on both sides of your head, this can be done on both of the feet. If you’re only feeling symptoms on one side of your head, focus on the foot that’s on the opposite side of your body. Feel for where the bones of those two toes intersect. Slide and press your thumb into the depression between those bones, holding for about a minute.

The Tai Chong pressure point can be very powerful. For this reason, it’s not advised for those who are pregnant, unless under observation. If you’re interested in learning more about reflexology, or to have a treatment plan designed specifically for your needs, schedule an appointment with a licensed therapist today.