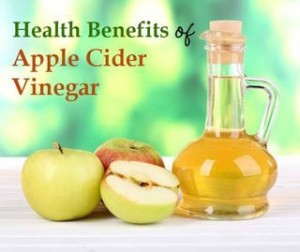 Drinking vinegar might not sound like the most appealing thing on the planet, but it may just be the daily boost your body needs. Apple cider vinegar, in particular, is a powerful body cleansing agent that’s been used as a healing elixir since 400 B.C. Raw apple cider vinegar is a naturally occurring antibiotic and antiseptic that can fight germs and kill bacteria.

Apple cider vinegar can clear sinuses and heal sore throats: Apple cider vinegar has a high potassium content, which helps to break up mucus and clear the lymph nodes. Its antibacterial properties can help prevent an oncoming sinus infection or cold.

Apple cider vinegar can ease digestion: The pectin in apple cider vinegar has been linked to proper intestinal function. ACV is also an acetic acid that reduces appetite, increases metabolism, and slows fat accumulation, all of which could lead to healthy weight loss.

Incorporate apple cider vinegar into your diet daily by starting with one teaspoon and working your up to two tablespoons. It’s not recommended to go beyond that. It’s important to choose organic, unfiltered ACV in order to reap all of the benefits. You can take it straight or diluted into water or juice. Our favorite way to drink it is as a tonic. Whisk together one tablespoon of apple cider vinegar, half a tablespoon of pure maple syrup, half a teaspoon of ground ginger (another disease-fighting ingredient), and half a cup of filtered water. Drink roughly 20 minutes before meals.